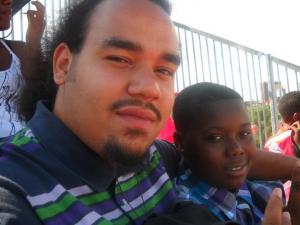 From a small jail cell this prayer was whispered, “Lord, I am tired of living like this. I know you are real. I pray that you would get me out of this life that I am living and that I would become closer to you.”

Jordan Thoms grew up in the realities of a rough neighbourhood. As his mom struggled to care for him and his two sisters, Jordan found acceptance and power on the streets of Scarborough. From the age of 12 he formed his crew and they would do things they saw the older boys doing – causing a ruckus, throwing rocks at car windows, and getting into fights. As they grew older, they started robbing people so they could get the things they wanted, and that quickly grew into selling drugs and being a part of gang activity.

Urban Promise, a Christian non-profit organization, was active in Jordan’s neighbourhood with after-school programs and camps. One day they asked him to come to their camp and he did – if not just to get out of the neighbourhood he felt trapped in. He really loved the camp and all the activities. His least favourite thing however, was Bible study and he would find ways to disrupt it.

Urban Promise eventually hired Jordan as a street leader – someone who lives in the community hired to be a leader with the kids. Part of the job was leading Bible studies. Jordan was not a Christian at the time and simply read what they had written on a paper. “God’s word is living,” Jordan now says. “Over the years, just reading those words off the paper – it was softening my heart towards God.”

Jordan had begun to realize that he wanted to change the way that he was living. During an event when he was sticking up for some of the younger youth in his charge, he was arrested for “threatening” and found himself in a small jail cell, praying the prayer above.

“I got bailed out the same day,” Jordan recalls. “I decided to follow more of what a Christian should be like. I was still wrestling with street life and the crew that I was rolling with, but I was taking the word of God more seriously.”

Five months later, two undercover police officers knocked on his door and arrested him in a case of mistaken identity for possession and trafficking of crack cocaine, the substance, and in the rock form. If convicted, Jordan would face a minimum of five years in prison. Jordan once again found himself in a jail cell talking with God. This time, however, he was angry. “I started to take you more seriously, I was not hanging out with my friends as much because I wanted to leave this life,” Jordan ranted. “And this is how you repay me!! How are you just? How are you right?” A couple of hours later, in the quiet of his cell, he heard a voice deep in his spirit say, “Don’t worry. I’ve got you.”

Sentenced to house arrest for 11 months, Jordan refused to speak with God for the first two weeks. “I was really questioning and battling with it,” reveals Jordan.
“I was so angry and upset but I kept hearing the words ‘Don’t worry, I’ve got you.’

After two weeks I settled down and realized that I could either be angry at God or I could just take this time to really seek Him. I had nothing else I could really do because I was on house arrest, so I decided to try to get to know Him.”

So for the next 11 months, Jordan read the Bible and prayed for hours each day. “It was cool,” reports Jordan. “I was praying and reading and the Lord would make himself visible to me and that would lead my hunger to want to read more because I was starting to see God.”

Jordan of course had some struggles because of his house arrest.
“I would ask God why this was happening to me,” he recalls. “God would answer other prayers but he never answered this one.” 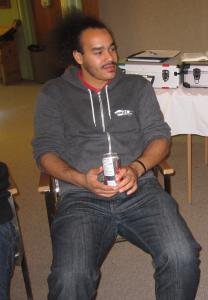 Fastforward a year, house arrest is done, and the trial is beginning. As Jordan’s trial began, the court room was filled with people supporting him – his family and a large group of people from Urban Promise. Three security guards as well as police officers identified Jordan and testified against him. “I’m thinking ‘I’m over!’” says Jordan. “You have the people that represent the law saying that this is me. I am going to prison for at least five years.” Although intimidated, Jordan took the stand and told the truth, that he wasn’t the person they were looking for.

As the judge concluded his verdict he said to Jordan, “You are innocent. You are not guilty. I believe your testimony and therefore all these charges against you are dropped.”

That evening, in the quietness of his room he felt God say to him, “Ask me again.” So Jordan asked the question again that had been only met with silence in the past, “Why did you allow this to happen to me?”

Jordan was astonished by the answer: “Because you asked for it.”

In Jordan’s confusion he was reminded of that prayer he prayed back in the small cell. God said to him, “Well, didn’t you come closer to me during this time?”

“It was like a big bang went off as I realized that everything that I prayed for, before any of this even happened, was answered, and then more,” Jordan explains. “I asked God, ‘Why couldn’t you tell me this earlier because it would have been easier for me if I would have known the outcome?’ God replied, ‘You never would have sought me as did.’” It was at that point in Jordan’s life that he gave his life over to God.

Today you will find Jordan Thoms in the same neighbourhood in Scarborough, but these days he rolls with a different crew. “Since being on house arrest,” Jordan says, “I have really fallen in love with the Word of God and I want to teach it and minister to people by it and through it. I really have a heart for my community that I live in.”

He has a crew of six or seven people and they are in the process of planting a church; currently looking for a space to meet. The team is involved in one-on-one Bible studies, home visits to provide the community with items such as groceries, and a young adults program with several young men. Jordan is also starting a prison ministry, meeting with young men from his community who have found themselves in the jail system.

Jordan, reflecting on the mistaken identity situation, remarks, “It was the worst thing that ever happened to me, but it is the best thing that ever happened to me in hindsight, because of what came out of it.” He continues, “A couple of people have said to me ‘If you can change, maybe I can change.’ That really chokes me up. They actually see Jesus now as a person that you can come to as you are, and not have to clean yourself up first. They have hope.”

MCEC walks alongside Jordan as he and his crew minister in Scarborough, providing  financial support and a coach, as he follows God’s calling in his life.

This is such a powerful story.  Thanks so much for bringing it to us.  I hope to use this in a worship service sometime in the future.  It's exciting to think we are part of work like this in MCEC.