Travelling Companions: We don’t know where we’re going but we know how to get there was the theme that framed the day. This also set the stage for an anticipated conversation about the future of Women of MCEC. Carmen Brubacher, Program Coordinator, introduced the discussion by noting that this is a moment of change for Mennonite women in eastern Canada. She says, “Women of faith have long adapted to their environments. While we grieve the loss of something meaningful and familiar, we also remain faithful to God's leading. Through this change we honour those who have come before us, carrying their hopes with us.” 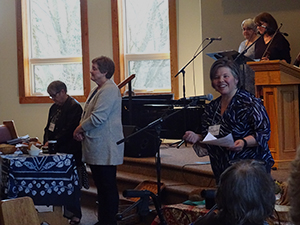 “The women engaged the day with seriousness, gratitude, and hope.
The theme was discernment and that is what they did.”

The original motion stated that WMCEC would dissolve their official structure as of December 31, 2019. The women amended the motion to include the addition of an ad hoc women’s working group going forward. Through the discussion and discernment of the group, it became evident that there was a deep desire to see the continuation of some form of women’s ministry emphasis in eastern Canada. Ly Vang, First Hmong Mennonite Church, implored the women to continue meeting. “We started coming four years ago,” she said of her congregation. “There were many barriers to us attending – one of them being language. I would like to see more cultural diversity at our gatherings and feel that it would be a loss to end them.”

WMCEC will officially dissolve as of December 31. Over the next eight months, donations will continue to support WMCEC projects and conversations for moving forward with an ad hoc women’s working group will begin.

“The women engaged the day with seriousness, gratitude, and hope,” says Marilyn Rudy-Froese. “The theme was discernment and that is what they did. They practiced discernment and gave themselves the space to express their gratitude and laments and to celebrate what this organization has meant. It was a pleasure to be with them.”